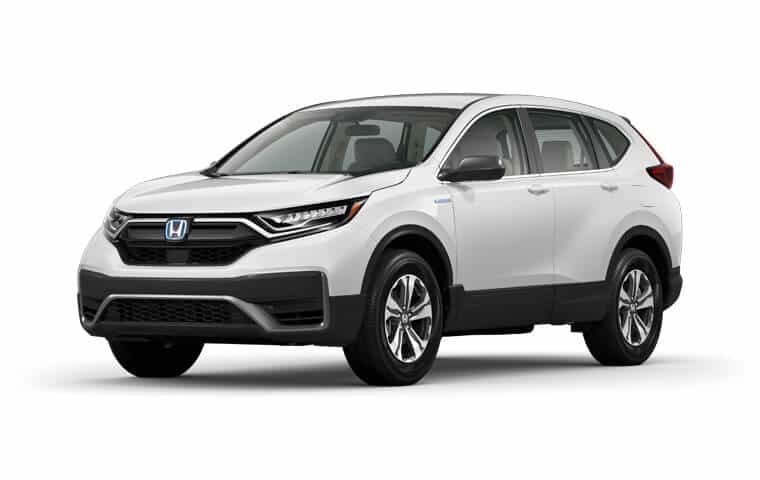 Buy this item
PROS
The CR-V has more power than the ordinary CR-V.
Exceptional fuel efficiency
All variants come standard with all-wheel drive.

CONS
Infotainment system that is out of date
There is no spare tire because the battery eats up baggage space.
Smartphone integration is not available on the base trim.

By 2030, Honda anticipates e-vehicles to account for two-thirds of its global sales, with hybrid cars accounting for half of that. The new 2020 Honda CR-V Hybrid joins a lineup of alternative-fuel Honda automobiles that includes the Accord, Clarity, and Insight. Honda clearly has big expectations for the CR-V Hybrid and believes it will achieve the same sales success as the standard model. Existing CR-V owners will undoubtedly find just as much to like here, with the added benefit of improved fuel economy. However, the first-of-its-kind CR-V Hybrid has a few drawbacks, such as reduced cargo room and an out-of-date infotainment system, which puts it up against the segment’s top seller, the Toyota RAV4 Hybrid.

LX, EX, EX-L, and Touring are the four trim levels available for the 2020 Honda CR-V Hybrid. It achieves 212 total horsepower and 232 lb.-ft. of torque by combining an Atkinson-cycle 2.0-liter inline-four engine with two motor generators. One motor is directly coupled to the engine, while the other is coupled to the differential, resulting in four driving modes—Sport, Econ, EV, and Normal—as well as steering wheel paddle-like deceleration selections for adjusting the system’s regenerative drag.

With the exception of a few badges, the CR-V Hybrid and its gas-only sibling will be virtually indistinguishable. It has the same pleasant but unremarkable external style as the previous model, and the interior has elegant wood trim and appears expensive for the segment.

Due to the battery’s location under the rear cargo hold, the CR-V Hybrid loses its spare tire, which is replaced with a tire repair kit. The seats also can’t be fully lowered to increase cargo capacity, causing the hybrid to fall behind its gas-guzzling cousin in terms of utility in favor of fuel economy.

The LCD instrument cluster ditches the tachometer and replaces it with graphics and information on the powertrain, including a display of the changeover between electric-only mode and gas engine mode, which kicks in at greater speeds. The hybrid model also replaces the shift lever with a push-button gear selector, which takes some getting used to.

The 2020 Hybrid model uses the same out-of-date infotainment system as the rest of the CR-V lineup, which continues to be Honda’s Achilles’ Heel. The volume and climate control knobs on Honda’s vehicles are simple to operate while driving, but the infotainment system’s touch screen is a different story.

The semi-matte finish hides fingerprints better, but it gives icons and the camera view a fuzzier appearance. We found the system to be more difficult to operate while driving than competitors’. The screen reaction time is also a little sluggish, and several controls are hidden beneath the main menu.

Honda, like most automakers, uses Apple CarPlay and Android Auto for cloud-based connectivity, and both are standard on all models save the LX. Although the base trim is only expected to account for 10% of sales, it seems myopic when it comes to developing brand loyalty in this enormous segment—especially when the Toyota RAV4 Hybrid does.

The Honda satellite navigation system is included on our Touring level, but Android Auto and CarPlay deliver constantly updated maps. Our test vehicle also included the HondaLink telematics system, which is lacking in capabilities when compared to competitors like Hyundai.

The hybrid powertrain responds to accelerator pumps with a vigor that the standard model lacks, although the CVT moans loudly and gives the impression that the engine is straining in Sport mode. The CVT, on the other hand, provides for smooth acceleration and deceleration, which isn’t always the case with other hybrids we’ve examined.

The change from electric to mixed gas/electric power is likewise smooth, with the engine’s sound replacing the electric mode’s buzz-hum pedestrian warning tone. The CR-V Hybrid has better insulation, which allows for a more relaxing ride, and the noise-canceling audio system keeps the engine hum at away.

It’s simple to see why the CR-V has been a midsize crossover favorite for so long. It’s a dependable workhorse that’s also enjoyable to drive, and the Hybrid variant adds performance and fuel economy to the mix. While the Touring trim we tested is approximately $3,000 more expensive than the ordinary CR-V Touring, it’s roughly $2,000 less expensive than a loaded RAV4 Hybrid Limited. It would be a very close call if it weren’t for a few flaws like the old infotainment screen, the loss of cargo room, and the lack of a spare tire, but the RAV4 wins out in the end.

The Best Telescopes for Beginners