For years, Amazon’s Fire TV platform has powered its own video streamers as well as numerous third-party TVs, but the company has never produced its own TVs. The Omni is one of Amazon’s first Fire TV-enabled televisions, as well as the most expensive in the company’s new selection. The Omni is still more budget-friendly than flagship, with a price tag of $829.99 for the 65-inch model we tested, and its picture quality reflects that. However, it includes all of Fire TV’s impressive capabilities, including hands-free Alexa voice control, making it an attractive alternative for a new smart TV that won’t break the budget. 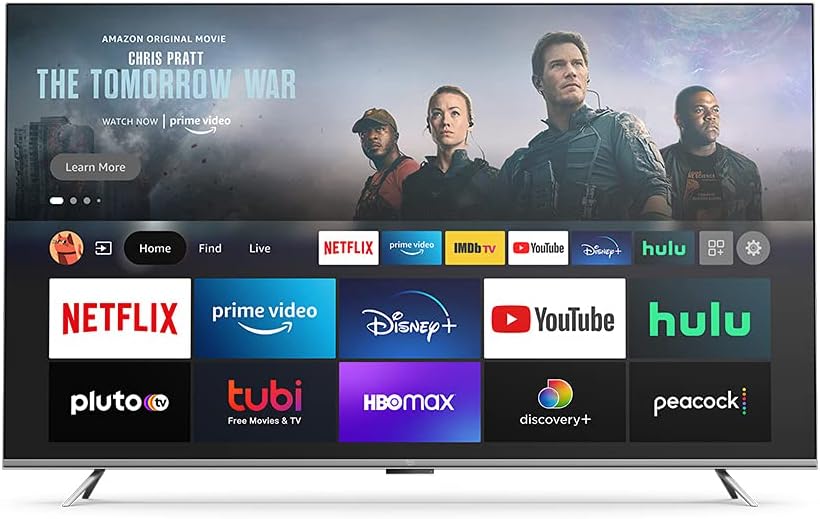 CONS
Color range and contrast are average.
There is no Apple AirPlay or Google Cast support.
Dolby Vision is only available on 65- and 75-inch sizes.

With a sprinkling of chrome around the edges, the Omni elevates an otherwise unremarkable design. The screen is enclosed by a practically bezel-less black border that is almost as thin as the screen itself. Only the bottom edge has a bezel, a gunmetal strip in the centre with the Fire TV logo in the middle, and a little protrusion below that with near-field microphones (a small switch on the underside turns off the mics). The TV can be mounted on the wall or stands on two metal V-shaped legs that are widely spaced.

All additional connections are on the right side of the back panel, with a power connector on the left. Four HDMI ports (one eARC), a USB 2.0 port, an optical audio output, a 3.5mm headphone socket, another 3.5mm port for the integrated IR emitter, an Ethernet port, and a cable/antenna connector are among the features.

The remote resembles the ones that come with the Fire TV media streamers. It’s a black rectangle with a huge, circular navigation pad near the top that’s flat and slightly rounded. Above the pad are power and Alexa buttons, as well as a pinhole microphone. The pad has menu and playback controls, as well as channel and volume rockers. Near the bottom are four specific service buttons for Amazon Prime Video, Disney+, Hulu, and Netflix. The remote connects to the TV wirelessly, eliminating the requirement for line of sight, but it also features an IR emitter. Another IR emitter on a lengthy wire can be installed in a cabinet to control your other home theater items via the TV and remote.

The Omni, like the Toshiba C350 and Amazon’s own Fire TV media players, is powered by Amazon’s Fire TV platform. It has a feature-rich, Amazon-centric UI with a large number of apps and services. Amazon Prime Video is of course built right into the platform, but it also supports Apple TV, Disney+, HBO Max, Hulu, Netflix, Twitch, and YouTube, among other non-Amazon streaming services. The interface includes a live guide that displays channels from streaming live TV services, Amazon channels, and Pluto TV.

In terms of device mirroring, Fire TV lags behind Google TV and Roku TV. WiDi/Miracast can reflect your computer screen, but Apple Airplay and Google Cast aren’t available for quick and convenient smartphone or computer mirroring.

The Omni does, however, come with Amazon’s Alexa voice assistant. All Fire TV video streamers and TVs include Alexa, which can be accessed by pushing and holding the Alexa button on the remote and speaking into it. The Omni, on the other hand, includes far-field microphones, allowing you to talk to the TV like you would a smart speaker like the Amazon Echo or the Fire TV Cube (the only other Fire TV device with hands-free Alexa). Simply say “Alexa,” then a command, and Alexa will respond and display any relevant information on the television.

Alexa is a capable voice assistant that can search for content, manage the TV and other smart home devices, answer common queries, and show your calendar and reminders. If you don’t want Alexa to always be listening, turn the button on the underside of the TV to turn off the microphone, which will be indicated by a small red LED.

Picture Quality at a Reasonable Price

The contrast numbers on the Omni aren’t that spectacular. Its direct LED backlight system isn’t exceptionally bright, and zone dimming to increase black level isn’t available. This means that whether we used an SDR or HDR input, or a full-screen white or 18 percent white field to test light output, we achieved essentially equal results. In Movie mode with the backlight set to maximum, we recorded an average peak brightness of 333.653cd/m2, with only 3cd/m2 differences amongst the four circumstances. Black levels were also disappointing, with an effective contrast ratio of 3,033:1 and a reasonably high 0.11cd/m2. The Vizio MQ6-J is a little darker (0.062cd/m2), but it can also get a little brighter (256.623cd/m2 with an HDR source exhibiting an 18 percent field) (4,139:1). If you can locate them, the slightly earlier Hisense H8G or TCL R635 will give you significantly greater contrast for a few hundred dollars extra (56,104:1 and 74,326:1, respectively). The 2021 versions of those TVs are more expensive, although being more brighter.

Color performance is slightly better on the Omni, but it isn’t quite up to par. Color measurements in Movie mode with an SDR source compared to Rec.709 broadcast standards and with an HDR signal compared to DCI-P3 digital cinema standards are shown in the charts above. The Omni gets Rec.709 right out of the box, although this isn’t as spectacular as it was a few years ago; many TVs can cover broadcast standard colors accurately with no effort these chevaliers. The HDR signal had undersaturated greens and reds, far below DCI-P3 standards. Blues, on the other hand, were realistic, and while other hues were undersaturated, they weren’t colored in any way.

In BBC’s Planet Earth II, the Omni’s limited color range shines through. While the colors appear to be balanced and natural, the greens of plants and feathers appear to be undersaturated, lacking the brilliance of the Vizio MQ6-J and other more expensive TVs. In all lighting settings, fine details like fur and bark may be seen well, yet shade does not appear to be extremely dark.

The red of Deadpool’s suit appears beautifully balanced in the cloudy opening moments on the Omni, while it isn’t nearly as vivid as it is on other TVs we’ve tested. Depending on how bright the overall frame is, shadow details in the flaming lab combat can appear muddy or washed out.

The Omni’s limits in brightness and dark levels are shown by the starkly contrasting pictures in The Great Gatsby’s party scenes. Black suits’ cuts and outlines tend to fade in the dark, and while they may be seen from the general brightness of the frame, they appear washed out. However, skin tones are genuine and nicely balanced, and whites manage to jump out despite the TV’s modest peak brightness.

In terms of features, the Omni falls short when it comes to gaming. The 60Hz screen supports only auto low latency mode (ALLM) and does not support variable refresh rate (VRR). Fortunately, it’s quite responsive in Game mode; we measured an input lag of only 2.6 milliseconds using an HDFury Diva HDMI matrix (Opens in a new window), making it one of the best TVs for gaming (at least in terms of lag; VRR would go far here). Remember to switch to that mode whenever you wish to play something, because the lag in Movie mode climbs to 111.4ms.

Amazon’s first Fire TV has a lot of capabilities, but it’s evident that the firm isn’t aiming to push the picture quality envelope. However, the Fire TV platform is incredibly functional, the hands-free Alexa voice control is great, and the Fire TV Omni is an intriguing pick for the price at $830 for a 65-inch screen. For a few hundred dollars more, the TCL 4K R6-Series and Hisense U7G both provide significantly higher contrast and color. The TCL model utilizes Roku TV, which has AirPlay but no genuine voice assistant, but the Hisense uses Google TV, which has Google Cast and a far-field microphone for hands-free Google Assistant. The Fire TV Omni, on the other hand, is an excellent choice if you want to save money and prefer Alexa.

CONS
Color range and contrast are average.
There is no Apple AirPlay or Google Cast support.
Dolby Vision is only available on 65- and 75-inch sizes.

You Should Know These 16 Apple TV Features