The 1080p Anker Nebula Cosmos D2140 has a flat oval shape that few projectors have. The 4K Anker Nebula Cosmos Max is the only other one we’ve seen. Instead, most room-to-room portables use the extra space to house the powerful sound systems that help characterize the category. In most cases, as with the Miroir M1200S and the Epson EpiqVision Mini EF12, our current top pick in the category, this results in a nearly cubical design. The two Anker versions demonstrate that making the projector wider rather than higher, and rounding off the corners for an oval shape, is just as effective. The $799.99 Cosmos is also slightly lighter than its closest rival. And, while it doesn’t quite match the EF12 as our top choice for room-to-room portables, it’s a strong candidate. 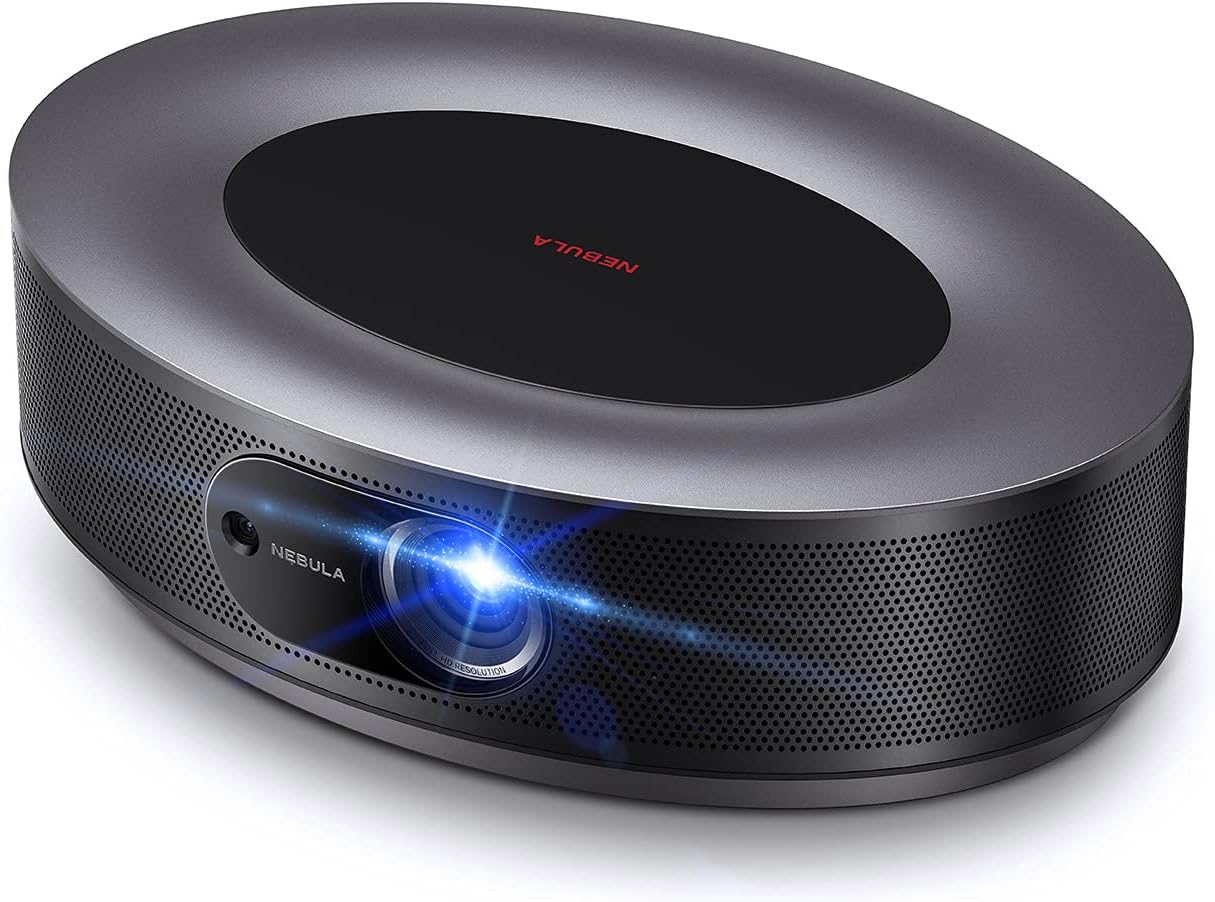 Easy to Setup and Move Around

The Cosmos is powered by a 1,920-by-1,080-pixel DLP chip and a 30,000-hour LED light source in Standard power mode. A fully integrated Android TV 9 is also featured. The remote needed to be paired multiple times before it worked, but the Android TV setup is typical otherwise, with Wi-Fi as the only option for connecting to your network.

The Cosmos, like many other Android TV projectors, compensates for the lack of an Android TV-compatible Netflix app with a downloadable Netflix app optimized for touchscreen mobile devices. To use it, download it to your phone, pair it with the Cosmos through Bluetooth, and operate the projector from your phone’s screen. The program was cumbersome to use in my tests, but the streaming worked flawlessly.

Room-to-room portables should, by definition, be easy to transport, including to the backyard for a movie night; they should also provide adequate audio so you don’t need to bring a sound system; and they should be simple to set up. All of these tests are passed by the Cosmos. It has a flat oval shape that measures 3.6 by 11.4 by 7.8 inches (HWD) and weighs only 3.3 pounds. It was simple for me to pick up securely with one hand.

The physical setup is standard for the genre. Connect the Cosmos to the power supply and, if desired, connect video inputs to one or both HDMI ports. Then turn it on and, if necessary, move the projector to adjust the image size. You can also utilize digital zoom, but like with any projector, it’s preferable to avoid it because it reduces brightness and introduces imperfections. No optical zoom is available. The auto focus, which can be activated with a single button press on the remote, consistently delivered the sharpest image possible, albeit the best focus was a little softer than I expected from 1080p.

The audio, which includes Dolby Digital Plus, is loud enough to fill a large family room while maintaining good quality, but you can also connect to an external audio system via the one HDMI connector with ARC compatibility or the S/PDIF optical audio output. Other Bluetooth devices can use the projector itself as a speaker.

Color accuracy for movies and games

The Cosmos comes with three different visual settings. At full saturation, they all give about comparable color accuracy, and many people will find any of them acceptable for casual viewing. However, tone mapping differs between Standard and Movie. Movie mode brightens dark scenes and dark portions in lighter images to improve shadow detail while also improving color accuracy in the midtones, making it my preferred option for most reasons and the one I chose for my viewing tests.

Game mode had a tone mapping comparable to Standard, but it also switched off video processing for keystone correction and digital zoom to reduce lag time, as tested. (Anker claims that the new firmware now has two Game mode settings, one of which does not disable keystone and hence has a larger lag.) Gamers will have to choose between the better shadow detail in Movie mode and the shorter lag in Game mode, which I measured at 31.4ms for 1080p at 60Hz using a Bodnar meter.

In my rigorous standard dynamic range (SDR) tests, I noticed a few colors that were slightly wrong in familiar situations, especially reds and oranges, but they never went beyond the realm of realistic. More importantly, I didn’t notice any severe flaws in unfamiliar content. A trained eye may perceive a little blue shift, but most people are unconcerned by modest blue shifts. Dark sequences in the formal tests lost some of the shadow detail I know is present in the original, but exhibited enough to make it clear what was going on.

The Cosmos also accepts 4K (3,840 by 2,160 pixels) input and downconverts it to original 1080p quality, as well as HDR. However, in my tests, it struggled to handle HDR, as do other budget projectors. It correctly identified the input as HDR10, but it lacks a feature known as HDR Brightness, which is required because the HDR10 standard permits the best setting to differ from one movie or video source to the next. The consequence was an overall darkening impact, even in bright situations, and a dramatic loss of shadow detail in the movies in our test suite. As is the case with many low-cost devices that advertise HDR capabilities, you’ll want to use SDR input wherever possible.

The Cosmos only supports 3D with DLP-Link glasses and top-bottom and side-by-side formats. It’s also worth noting that you have to manually switch between 2D and 3D modes. In my experiments, I detected no crosstalk and just slight 3D-related motion glitches, which are typical of current-generation projectors. The image was also noticeably brighter than most projectors’ 2D settings, making it watchable at the same image size I used for 2D.

On the good side, although seeing them frequently, I saw almost no rainbow artifacts (red-green-blue flashes). You may try it out for yourself because Anker welcomes returns for any reason within 30 days after purchase. You will, however, be responsible for the return shipment.

The Cosmos has a 900 ANSI lumen brightness rating. The brightness in Movie mode was close to what I would anticipate from a 500 lumen display. It was bright enough for SDR material to light up a 90-inch, 1.0-gain screen in a dark environment. Under these conditions, it’s watchable, but low ambient light washes it out a little. The image was bright enough to stand up to low to moderate room light at night on an 80-inch screen in a family room, and watchable but washed out with daylight coming through the windows.

Make it a bundle

A Lightweight Projector in a Small Package

If you’re thinking about buying the Cosmos, compare it to the Miroir M1200S and Epson EF12. The Aptoide apps on the M1200S aren’t as good as those on Android TV, but the projector has somewhat higher image quality than the Cosmos. The EF12, which runs on Android TV, doesn’t support 3D, but it’s brighter and has greater color accuracy than the Cosmos, making it our Editors’ Choice for the category.

If you need even more brightness, consider the Epson EF-100, which has a native resolution of of 1,280 by 800 pixels but a lumen rating of 2,000. If you plan to set up for backyard movies on a regular basis or want a room-to-room portable that can also be taken on camping excursions, the BenQ GS50 is a good option. It has water resistance and can withstand 2.3-foot falls.

All things considered, the Anker Nebula Cosmos is the lightest projector in this bunch, which can be a significant benefit if you plan to move it around frequently. It also has good image quality, Android TV, a Netflix app, 3D capability, and a powerful sound system. That quickly adds up to make it a good deal.

1.How do I get Netflix to work on Nebula Cosmos?

2.How can I link my iPhone, iPad, or MacBook to Nebula Cosmos?

Install the “AirScreen” app from the Google Play Store and link Nebula Cosmos and your iOS smartphone to the same WiFi network.

3.Can a USB flash drive be used to play movies?

5.How can I get Nebula Cosmos to autofocus?

To activate autofocus, move the device slightly or hit the “focus” button on the remote.

Pros 👍Interface that is both simple and dependable in...
Read more
Computers

Regular readers of The GGT may recall that I...
Read more
Travel, Outing & Sports

By introducing a new model to the LG OLED...
Read more
Electronics

Amazon's home robot is exactly what I expected, but...
Read more

Sony has officially revealed the design of the PlayStation VR2.