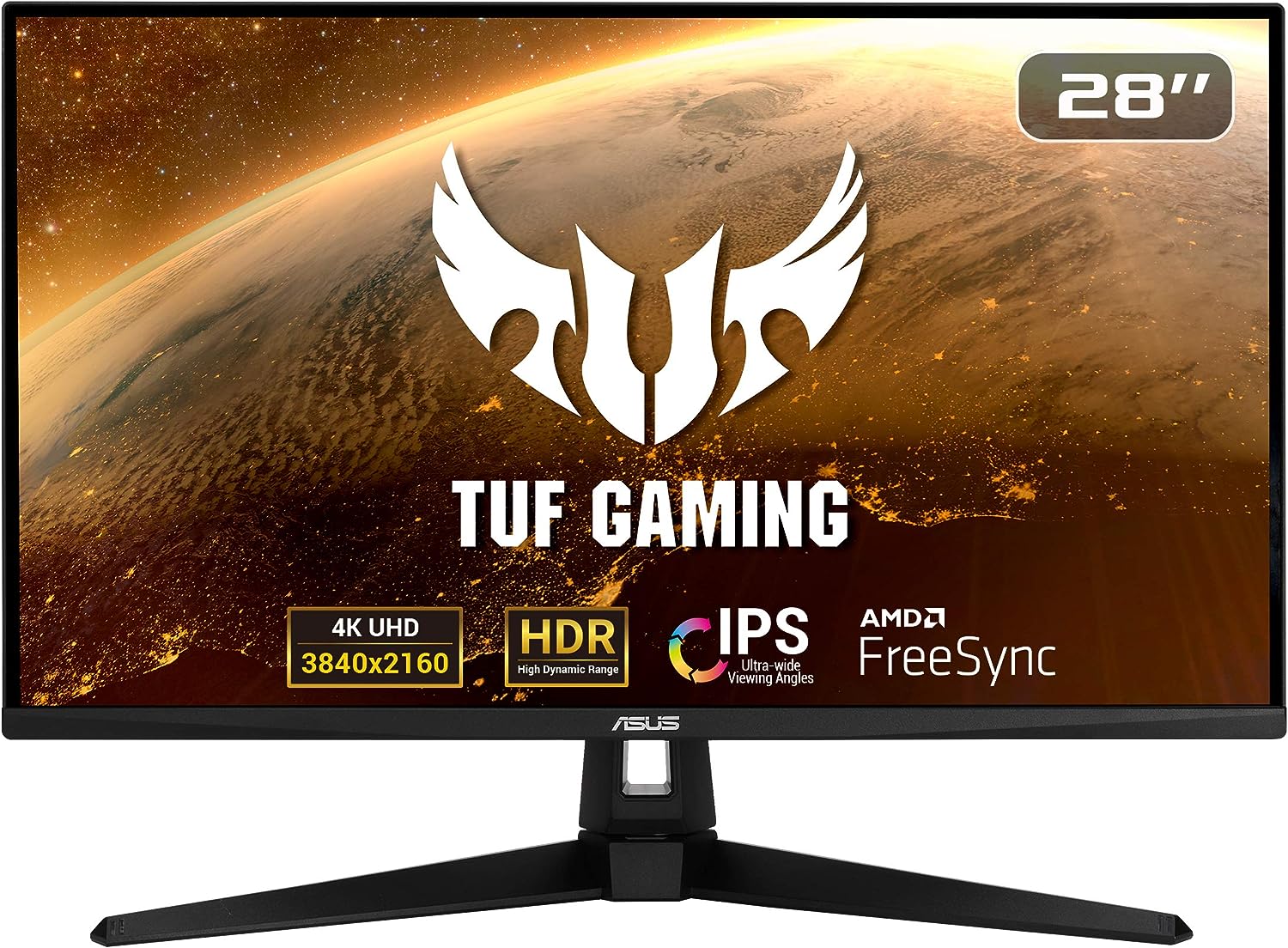 Buy this item
With the Asus TUF Gaming VG289Q, you get 4K resolution without the expensive price tag, as well as viewing flexibility. It does, however, have a few minor flaws that prevent it from being a no-brainer.
PROS
CONS

You also receive a highly adaptable stand with a wide range of swivel, tilt, pivot, and height adjustments. One of the best features of this 4K gaming monitor is its ability to tilt from -5 to +20 degrees, swivel from 62 degrees in each direction, and pivot 90 degrees in either way for portrait mode viewing. That’s greater flexibility in viewing positions than most modern displays provide.

When you combine its 4K resolution and ergonomics with three thin bezels, an easy and tool-free wide, stable base, a cable management clip, two built-in 2-watt speakers, and a sturdy frame, you’ve got yourself a fairly high-quality, affordable 4K monitor.

However, if you’re a gamer who values visual quality over anything else, the Asus TUF Gaming VG289Q has certain flaws. Right out of the box, our review device had a dead pixel on it. Is this a result of poor quality control or simply bad luck? Who knows, but it’s definitely not something you’d want to see on a brand-new display. The monitor also has a limited connector selection (just two HDMIs, one DisplayPort, and a 3.5mm audio jack), and its refresh rate of 60Hz and response time of 5ms aren’t the fastest on the market.

While it handled Rocket League with ease, we did notice some stuttering when playing games with higher graphics demands, such as Red Dead Redemption 2 and Doom: Eternal. And this was with an Nvidia GeForce RTX 2080 Ti-equipped system. Granted, the stuttering was caused by ambient factors such as passing trees when riding a horse, so only the most observant will notice it. Turning on V-Sync, which also supports Adaptive-Sync and AMD FreeSync, seems to reduce, but not fully remove, the stuttering.

To be fair, the Asus TUF Gaming VG289Q’s 90 percent color gamut does produce perfect detail, outstanding sharpness, and brilliant, true colors. Doom: Eternal is vivid and sharp, and Death Stranding looks fantastic on it. Movies and series like Spiderman: Into the Spiderverse and Mindhunter are examples of this. It scores well on the Lagom tests for contrast, black level, white saturation, and viewing angle.

That doesn’t change the fact that the gameplay might be more fluid. It’s not bad, but for detail-oriented or Esports gamers, a monitor with a faster response time and maybe a higher refresh rate might be a better choice.

Its HDR10 function is also ineffective. To be clear, this isn’t VESA-certified HDR; it’s merely a standard, although the most basic. While the lowest HDR standard is still preferable than no HDR, it isn’t a significant gain in practice.

There are two HDR settings on the Asus TUF Gaming VG289Q: Cinema HDR and Gaming HDR. There isn’t much of a difference between the two, but a keen eye will note that the Cinema one is somewhat colder and the Gaming one is little warmer.

Both would have been fantastic features to have, but neither of them appear to be true HDR. Rather of widening the dynamic range so that the darkest shadows are more visible and the blown-out highlights are less visible, the monitor simply overlays a thin veil over the entire image, reducing contrast more than anything else.

The Shadow Boost functionality is the same way. While the goal of both is to improve image details by better exposing dark areas and reducing overexposures, they aren’t as effective. Toggling HDR on may help to reduce blown-out highlights, but it’s more about making darker areas go from black to dark gray than it is about extracting more details out of them. If you were hoping for these characteristics to offer you a competitive advantage in gaming, you could be disappointed.

Do we really want to start nitpicking when the Asus TUF Gaming VG289Q is the gaming display that most people have been waiting for – a 4K gaming monitor without the excessive price tag? Well, that depends entirely on your priorities.

If all you need is a decent-sized gaming monitor with 4K resolution, this display’s value is hard to beat, especially given the lack of frills and thrills that come with it. If you want really smooth performance to go with that magnificent screen, however, you’ll have to pay a little extra.

If you want to buy it, you should…

Despite the fact that many 4K monitors on the market today are exorbitantly priced, the Asus TUF Gaming VG289Q offers that luscious 4K resolution for less than half the price of the competition.

You’ll need a monitor that’s comfortable to use.

Its flexibility to tilt, swivel, and pivot beyond ordinary monitors is one of its best design advantages. It can tilt from -5 to +20 degrees, swivel in both directions up to 62 degrees, and pivot up to 90 degrees.

When you combine ultra HD resolution with rich, brilliant colors, you have a monitor that’s perfect for watching movies and shows on.

You’ll need a display with a quick refresh rate and response time.

Unfortunately, the Asus TUF Gaming VG289Q stutters when playing AAA games at the maximum settings due to its 60Hz refresh rate and 5ms reaction time.

You have cash on hand.

If you have the financial means and spend a lot of time gaming, invest in a higher-quality 4K gaming monitor with a faster refresh rate and response time.

HDR10 isn’t VESA-certified HDR; it’s just a standard, and it’s the cheapest. In actuality, rather than increasing details, this monitor just reduces contrast to brighten dark areas and eliminate blown-out ones.

Buy this item
With the Asus TUF Gaming VG289Q, you get 4K resolution without the expensive price tag, as well as viewing flexibility. It does, however, have a few minor flaws that prevent it from being a no-brainer.