The ZenWiFi ET8 ($529.99), the newest member of the Asus ZenWiFi mesh system family, is the company’s most advanced mesh system to date. This system uses the newest Wi-Fi 6E technology to provide seamless house-wide wireless networking, allowing compatible clients to connect through the 6GHz radio band. In our tests, the ET8 had excellent signal and overall performance, was simple to set up, and comes with free lifetime anti-malware and parental control tools. For Wi-Fi mesh setups, it’s our new Editors’ Choice. 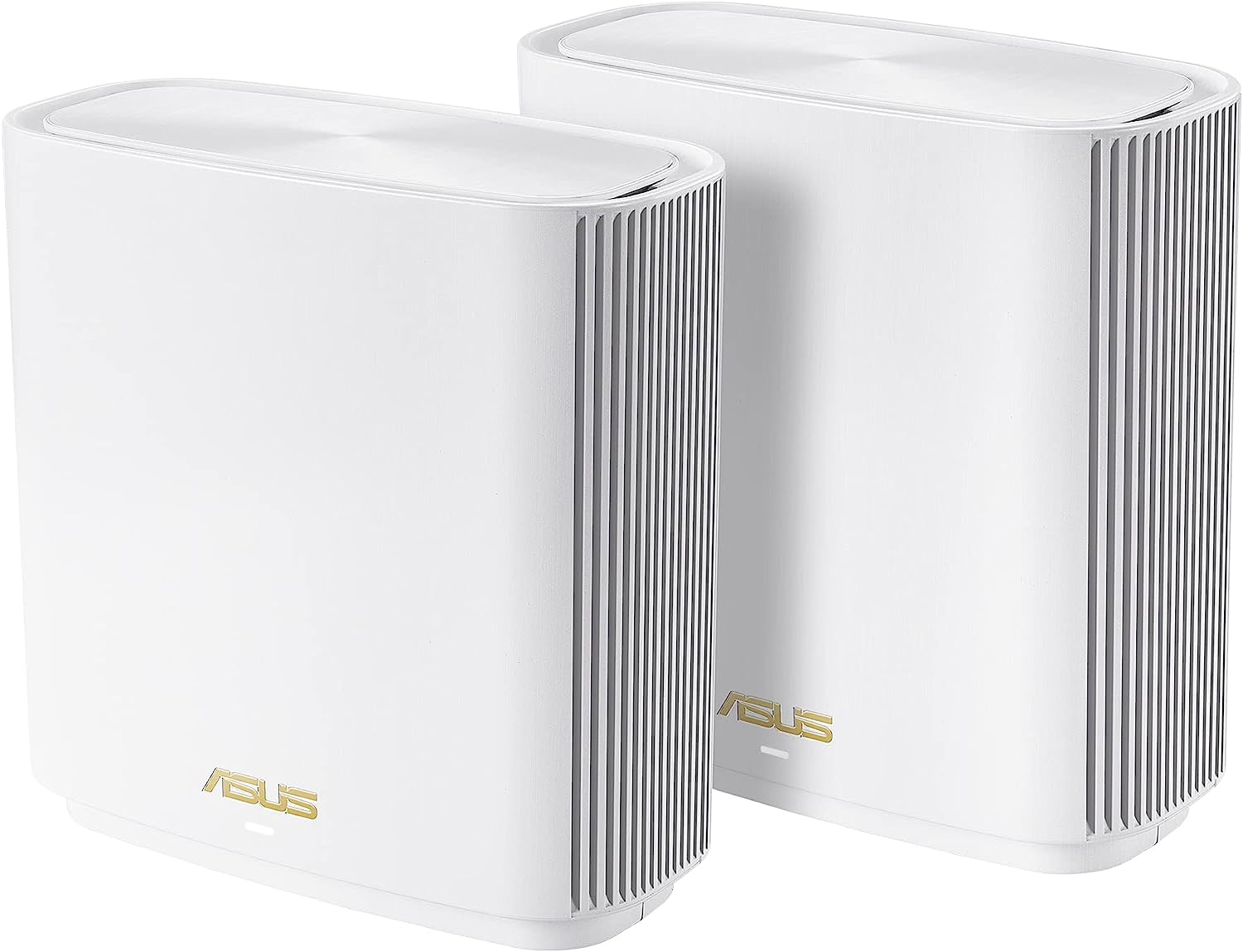 CONS
Pricey
A web console is required for some complex settings.

The ET8 is a Wi-Fi 6E system, which means it can use the 6GHz radio frequency to give quicker throughput, reduced latency, and more bandwidth than the more busy 2.4GHz and 5GHz bands. The 6GHz band can only be accessed by client devices that support Wi-Fi 6E. 160MHz channel bandwidth, 1024 QAM, Orthogonal Frequency-Division Multiple Access (OFDMA) data transfers, MU-MIMO simultaneous data streaming, WPA3 encryption, and direct-to-client signal beamforming are all features of Wi-Fi 6.

The ET8 is a two-piece mesh system that can cover up to 5,500 square feet of space. It comprises of two nodes that are identical to the nodes used in the ZenWiFi AX XT8 system from the previous version. They have a white finish with ventilation grilles on both sides and measure 6.3 by 6.2 by 2.9 inches (HWD).

During the setup procedure, a small LED indicator on the front of the node glows blue, then turns white when the satellite node has a strong wireless signal. A yellow light indicates a weak signal, whereas a red light indicates that the router node’s signal has been lost. A 2.5Gbps WAN port, three 1Gbps LAN ports, a USB 3.1 port, a power port, and a power switch are all included on the back panel. For wired backhaul, you can use a LAN connector or use the wide 6GHz spectrum wirelessly.

The ET8‘s parental settings allow you to customize online filtering, access scheduling, and usage tracking based on your child’s age. You can automatically block access to sites with adult material, such as gambling, pornography, and violence, as well as shopping, gaming, instant messaging, and media streaming. You can also instantly disable internet connection with a single button press.

Do (almost) Everything in the App

The Asus Router mobile app for iOS and Android devices provides a user-friendly interface and several administrative capabilities. The app’s Home screen shows a network map with each connected node, as well as the LAN IP address and network name. There’s also a button for selecting a QoS setting and another for optimizing the network based on each node’s location.

The Home, Devices, Insight, Family, and Settings buttons are located at the bottom of the Home screen. From anywhere in the app, the Home button takes you to the Home screen, and the Devices button opens a screen with all connected client devices and mesh components (nodes). You can see which node each client is linked to in this section. To prevent access or optimize the connection for any client, tap it. You can also prioritize client bandwidth for gaming or streaming apps, or set bandwidth limits.

The Insight page allows you to share Wi-Fi access through QR code, check the strength of your password, and search for open mesh nodes, while the Family panel allows you to establish profiles for family members and add parental controls. You may run network scans and enable AIProtection capabilities like the aforementioned Intrusion Prevention System and malicious site filtering from the Settings menu.

Although the app is highly sophisticated, it does not have access to all of the ET8‘s options. To establish VPN profiles and access more advanced settings like port triggering and firewall settings, you’ll need to use the web console.

The ET8 supports Amazon Alexa commands, allowing you to perform things like enable the guest network, halt internet access, reboot the router, and update the firmware with just your voice.

It was simple to set up the ET8 for the first time. I connected one of the nodes to my modem, then downloaded the Asus Router mobile app and selected Setup on the first page. The ET8 was promptly identified through Bluetooth after I picked “Asus ZenWiFi Series” from the list. After that, I went to the ET8 tab and followed the directions to setup both nodes next to each other. When I turned on the second node, it asked for a new network name and password. (If you like, you can divide the 2.4GHz and 5GHz bands, or you can let the smart-connect feature determine the ideal band for you.)

I made an account and then selected Next to let the program set up the network for me. The network optimization process was completed a few minutes later. The satellite node should be placed about 30 feet away from the router as the final stage.

On our throughput performance tests, the ET8 system performed admirably. To test speeds on the 2.4GHz, 5GHz, and 6GHz radio bands, we utilize a Samsung Galaxy S21 Ultra phone with a Wi-Fi 6E radio. The router node produced 121Mbps in the 2.4GHz close-proximity (same room) test, matching the Linksys Atlas Max 6E router, while it outperformed the Atlas by 11Mbps at a distance of 30 feet. The ET8 satellite node’s close-proximity test scores of 119Mbps and the 30-foot test scores of 60Mbps were substantially identical to the Atlas node’s (120Mbps and 61Mbps, respectively). The 2.4GHz findings aren’t shown here, but the more important 5GHz and 6GHz results are…

The 6GHz band performed admirably. The ET8 router scored somewhat lower than the Atlas (929Mbps), but it had far superior range, scoring 371Mbps on the 30-foot test versus 258Mbps for the Atlas. The satellite nodes yielded similar results: The ET8 node’s close-proximity score of 580Mbps couldn’t quite equal the Atlas Max node’s 598Mbps, but it did better in the 30-foot test with a score of 333Mbps. (On this test, the Atlas Max scored 218Mbps.)

The colors on the maps show signal strength, while the circles represent the position of the router and node. Dark green denotes the strongest signal, yellow indicates a weaker signal, and gray indicates no signal reception. The two nodes had no issue sending strong 2.4GHz and 5GHz wifi signals to all parts of the home, as indicated on the map. (6GHz measurements are not supported by Ekahau.)

Conclusion: With Wi-Fi 6E, this is the best mesh system yet.

Look no farther than the Asus ZenWi-Fi ET8 if you want to future-proof your home network with Wi-Fi 6E technology. This two-piece mesh system connects via the 6GHz radio band, is simple to set up and administer, and provides high throughput and signal strength.

It also has a USB port and a multi-gigabit WAN port, as well as AIProtection, which provides free lifetime network security and parental control capabilities. As a result, it’s an easy choice for our Editors’ Choice pick for Wi-Fi mesh systems.

CONS
Pricey
A web console is required for some complex settings.