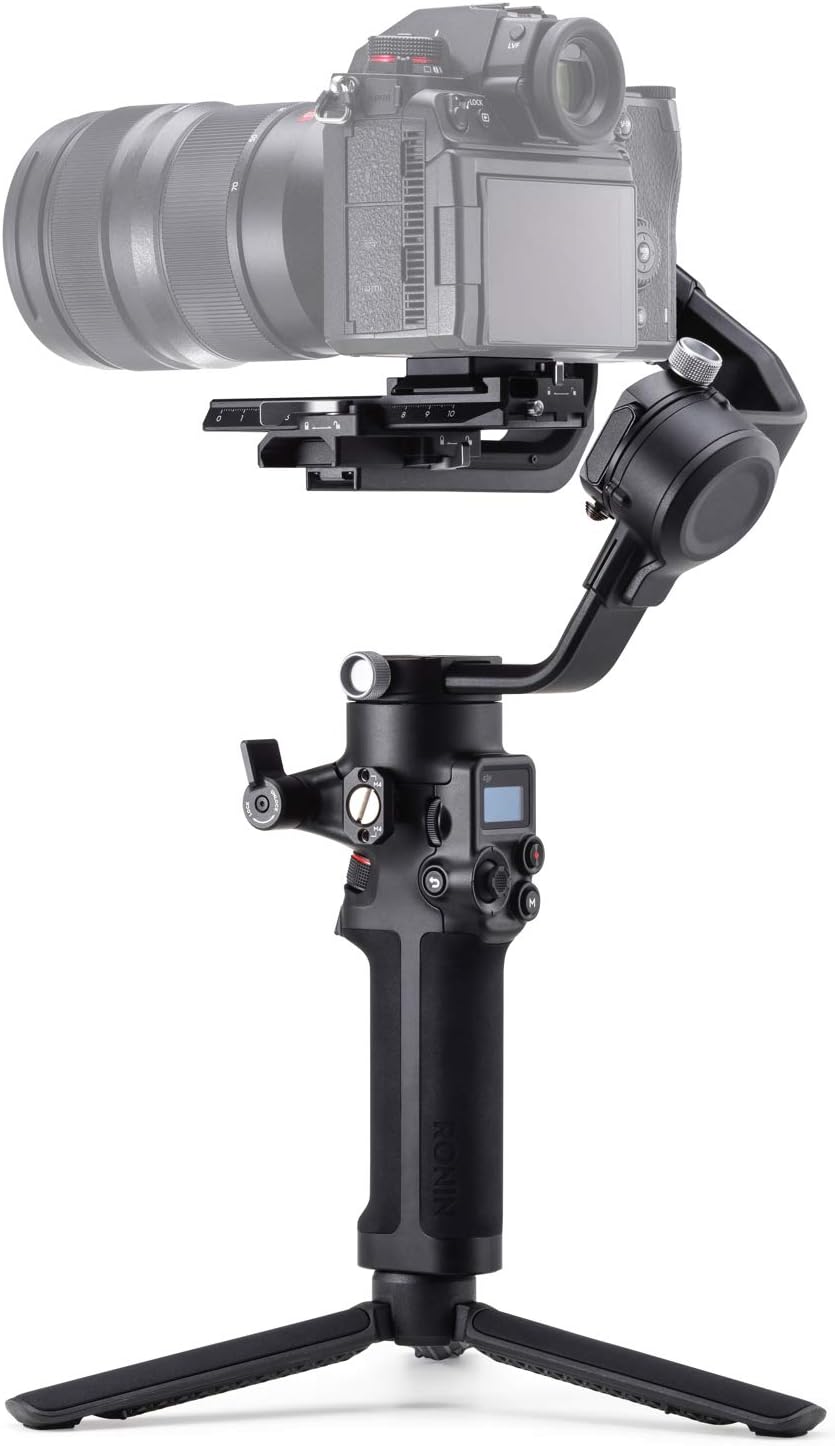 Buy this item
The DJI RSC 2 is a mirrorless camera gimbal with a clever, folding design and outstanding stabilization.
PROS
CONS

Although DJI is most known for their drones, the business also produces flying cameras. Its Ronin gimbal series has been around almost as long, and has come a long way in terms of design since the initial iteration. The RSC 2 ($499) is a new version of the RSC that folds down for simpler storage and transit while still being powerful enough to operate with full-frame mirrorless cameras. It is less expensive than the competing Zhiyun Crane 2S ($599), and while some may prefer the Crane’s interchangeable batteries, the RSC 2‘s foldable frame wins the day, earning it Editors’ Choice.

Travel vloggers who travel the world place a premium on having the highest-quality equipment in the smallest possible package. We’ve seen a lot of camera gear designed with portability in mind in recent years. You’ll pay a premium for some items, such as the carbon fiber Peak Design Travel Tripod, but there are benefits to going compact as well—one recent example is the slim, full-frame Sony a7C.

The DJI RSC 2 adds its voice to the chorus. It provides the same level of stability as larger competitors, such as the Crane 2S, but without the mass. It’s a little smaller (15.7 by 7.3 by 6.9 inches, HWD) and uses carbon fiber to keep things light. The RSC 2 is slightly lighter than the Crane, weighing little under 3 pounds. The DJI model can hold rigs weighing up to 6.6 pounds, while the Crane 2S can hold rigs weighing up to 7 pounds.

Consider the DJI RS2 or Zhiyun Crane 3 if you have a heavier rig—both can carry larger cinema cameras, up to 10 pounds for the RS2 and 14 pounds for the Crane 3.

The battery is built inside the device and is charged through USB-C. On a full charge, DJI believes that the battery would last roughly 14 hours, which is more than enough for all-day location work. As the number of recharge cycles increases, expect battery life to decrease. If you want swappable batteries, the Crane 2S is available.

Gimbal veterans will have no trouble getting the RSC 2 up and running, but newcomers may encounter some difficulties. It’s not insurmountable; my main issue was accidently folded it backwards, causing the camera to slide into the plate in the incorrect orientation. You’ll unfold it correctly if you keep the tilt motor close to the grip side and the USB-C control ports facing forward.

You won’t need any tools to put everything together, although you might want to keep a screwdriver on hand just in case. DJI’s mounting plates are secured with thumb screws. The convenience is nice, however when the plates are just finger-tight, they can slip. The problem is fixed with a little further tightening with a flathead screwdriver.

I put the gimbal through its paces with two full-frame mirrorless cameras. On the RSC 2, the Sony a7S III and FE 12-24mm F2.8 GM lens spent the most time. I also used it with the ultra-compact Sigma fp L and the 14-24mm F2.8 DG DN Art lens for a few shots.

You must balance your camera once it has been fully unfurled. Connect the two-piece mounting plate to the camera body, install the lens cradle support, then try to find the camera’s center of gravity to get started.

The camera should now be tilted straight up and centered along the vertical arm. The adjustment rail is loosening and tightening with a large silver thumb screw. When the camera is centered on these two axes, you may tilt it in any direction and it will stay perfectly in place—if it drifts, something is wrong.

You’re now ready to go on to the third axis, which determines the horizon line. It gets easier with repetition, but the RSC 2 isn’t forgiving of even minor imbalances. The Crane 2S performs a better job here, because to its wider frame, which means you don’t have to balance as precisely to get things right.

A variety of stabilization modes are supported by the RSC 2. The default is Pan Follow, which you’ll probably utilize for most photos. It allows the pan axis to follow your movements, resulting in video that is level and smooth, similar to that of a drone. Switch to POV to get a first-person perspective if you want to express more sensation of motion.

Both of these work at chest level or in a low-to-the-ground underslung configuration. The latter is beneficial in portraying a sensation of movement. Even at running speed, the RSC 2 does an excellent job smoothing out my irregular footsteps in either mode.

A Vortex mode, a 360-degree roll for spinning, dizzying photos, is also available. To enhance the appearance, I combined it with a fish-eye lens. You can use the thumb stick to control the roll or set it to go automatically.

There is some camera integration. Compatible cameras are connected to a USB-C port, allowing you to adjust settings directly from the gimbal handle. A Record button is used to start or stop recording, and a control wheel is used to adjust the lens aperture. The camera may be panned and tilted using a thumb stick.

The M button toggles between stabilization modes, and settings are changed via an OLED display and menu. You can also modify settings using the DJI Ronin smartphone app, which is available for Android and iOS devices and is free to download. It also unlocks some new creative possibilities, like as time-lapse photography with motion and manual tracking, which DJI refers to as repeated, automatic camera movements for video. It’s a recommended download because it makes configuration easier and more visual.

The RSC 2‘s functionality can be expanded by adding attachments. The gimbal integrates with DJI’s RavenEye wireless transmission system to send a live video feed from your camera to the Ronin smartphone app, and it offers powered follow focus for manual lenses.

If you’re interested in the extra features, RavenEye is available as an a la carte option for $159. If you want to get started right away with the whole equipment, start with the $739 RSC 2 Pro combo, which includes RavenEye, sturdier tripod feet, a follow focus kit, a smartphone mount, and a zipped carrying case.

We’re sold on the folding design.

A gimbal is an excellent choice for those looking for a handheld stabilization device for recording smooth 4K footage. The DJI RSC 2 is a smaller version of the company’s popular Ronin series, both physically and in terms of its name.

It’s also a really stable platform. You’ll get less obvious bounce in handheld walk-and-talk vlogs than you would with a stabilized sensor or lens alone. When compared to larger gimbals like the rival Zhiyun Crane 2S, it has camera control for mirrorless cameras used by YouTubers and vloggers, and the folding shape makes it a far better travel companion.

It isn’t a flawless product. For many, the built-in battery is the most difficult obstacle to overcome. If you run out of juice in the field, you’re out of luck—USB charging is an option, but it takes longer than swapping out for a new set. Balancing a camera is a little more difficult than with the Crane 2S, but it’s really just a question of taking a few additional minutes to make sure everything is in order before you start shooting.

The Crane 2S is worth considering if you don’t mind a larger gimbal and appreciate the ability to replace batteries in the field. It costs $100 more than the RSC 2, however it occasionally goes on sale and may be had for less. Even if the Crane 2S is cheaper, we believe the foldable RSC 2 is a more compelling gimbal, especially for travel, and our Editors’ Choice winner.