Nokia has returned to the tablet market after a long absence. The Nokia T20 ($249.99) is the company’s first new product, and it’s a cheap tablet that’s also designed for business. We enjoy its extended battery life, good build quality, and Nokia’s commitment to software updates for several years. However, due to its genuinely poor display, we are unable to recommend the T20. The $259.99 Lenovo Tab P11 Plus, our Editors’ Choice for inexpensive tablets, boasts a significantly better screen and top-notch speakers for virtually the same price. 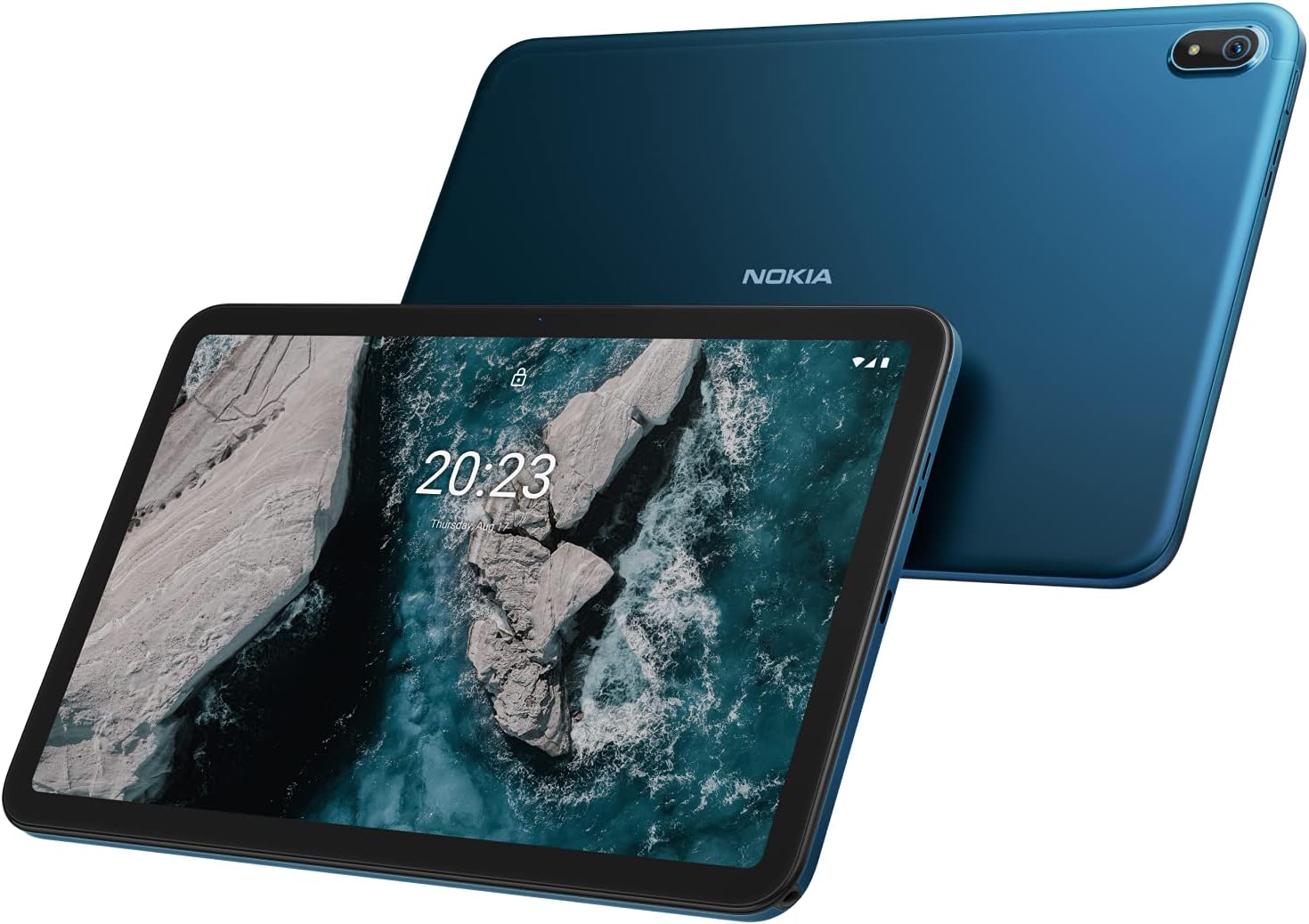 It Has the Appearance of a Large Nokia Phone

Nokia’s smartphone lineup is recognized for its functional design, and the T20 continues that legacy, although in tablet size. Everything about this tablet looks and feels like a supersized Nokia smartphone, from its thick bezels to its matte blue aluminum back panel.

The T20 measures 9.7 by 6.2 by 0.3 inches (HWD) and weighs 16.6 ounces, making it both light and slim enough to slip into your bag. The weight is distributed evenly, while the rough aluminum back provides additional grip.

On the front is a 10.4-inch LCD. Despite having the same 2,000-by-1,200-pixel resolution as the Lenovo Tab P11 Plus, the screen isn’t as sharp, and we observed pixelation around app icons even from a distance. Furthermore, the screen has poor viewing angles and a cold, blue-leaning color tone. Since HMD, the company that owns Nokia, started leasing out most of its products to ODMs a few years ago, we’ve found similar concerns with many of Nokia’s inexpensive phones.

You can change the white balance of the screen in the settings, but it won’t help much. We eventually turned off the adaptive brightness feature because the brightness fluctuated dramatically every time we angled the tablet by a few degrees. Finally, the Eye Comfort mode does not operate with custom white balance settings, and instead applies a proprietary color profile to the display that is best characterized as tobacco-stained. The only thing the T20‘s display has going for it is that it’s bright enough to view in direct sunshine.

The tablet’s back has a small oval camera module in the top left corner, with a Nokia logo in the center. A power button and a small speaker grille are located on the top edge. Nokia, like the similarly priced Lenovo Tab P11 Plus, doesn’t include a fingerprint sensor in the power button, so you’ll have to use a PIN, a passcode, or Android’s shaky Face Unlock function to keep the device secure.

The tablet’s left edge is unadorned, while the right side features a volume button, a microSD slot, and a few tiny holes that we assume are for specialist attachments, though none are listed on Nokia’s website. Although the microSD tray appears to have place for a SIM card, the T20 does not allow cellular connectivity in the United States.

A USB-C charging connector and an extra speaker grille are located on the bottom edge, while a 3.5mm headphone jack is located on the curved bottom left corner. We think this is the best location for a headphone jack because it’s less prone to water damage than top-mounted options, and it’s far enough away from the USB-C port to keep your headphones from tangling with the charging wire.

The T20‘s OZO-tuned dual speakers sound surprisingly nice, even though they’re no match for those on the Lenovo Tab P11 Plus. The tablet’s maximum volume is 92dB, which means it can easily fill a room with sound. The speakers have a small soundstage and push the mids forward slightly, but the lower and upper frequencies are never muted or weak. For cordless audio, Bluetooth 5.0 is also included.

The T20 is powered by a Unisoc T610 SoC and 4GB of RAM. The tablet’s 64GB model had around 50GB of storage available right out of the box. If you need more storage, you can use the microSD card slot to add up to 512GB.

You’re not alone if you’ve never heard of Unisoc. While Qualcomm and MediaTek dominate the smartphone and tablet markets in the United States, Unisoc is a prominent player in the global affordable market. Because many chipsets have the same core design and clock speeds, direct comparisons between them are difficult; coprocessors and instruction sets for AI and ML applications tend to be the differentiators. If we had to compare the performance of the Unisoc T610 to another chipset, we’d say the Qualcomm Snapdragon 662 comes close.

Apps open swiftly on the T20 in any event, and we didn’t observe any lag while sliding between screens. With over a dozen programs running in the background, we didn’t notice any slowness. However, if you open more than a dozen Chrome tabs, you may notice some caching.

Because of the poor display, it’s difficult to suggest the T20 for gaming, but it’s powerful enough for casual games; we played Alto’s Odyssey for nearly an hour and didn’t notice a single skipped frame or lag. On the other hand, Genshin Impact, a mobile game that requires a lot of horsepower, took a long time to load and had occasional lag and skipped frames.

Benchmarks are valuable for quantifying differences between devices, but they aren’t reflective of everyday performance. The T20 scored 347 for single-core performance (SC) and 1,542 for multi-core performance (MC) on Geekbench 5, a set of tests that gauges raw power (MC). That’s not as good as the Lenovo Tab P11 Plus‘s (500 SC/1,592 MC) or TCL Tab Pro 5G‘s (521 SC/1,762 MC) results. If you’re primarily interested in playing games, the $329 Apple iPad comfortably outperforms every affordable Android tablet we’ve tested.

The T20‘s 8MP rear camera isn’t very impressive, but it’ll suffice for scanning papers or QR codes and snapping quick reference photos. The sensor performs best in bright situations, but it will still fall short of your smartphone camera. In bright light, the 5MP front-facing camera handles conference calls effectively, but in low light, it stutters. We noticed mild ghosting and the background appeared flat during our daytime Zoom tests, but these effects aren’t serious enough to pose concerns during calls.

The tablet has dual-band Wi-Fi, which we tested over a 5GHz connection with Verizon’s 5G Home Internet router. Speeds averaged 135Mbps down and 24.1Mbps up at a distance of 10 feet from the router. Speeds dropped to an average of 77.4Mbps down and 16.8Mbps up from a distance of 25 feet. At 10 and 25 feet, an iPhone 13 Pro Max connected to the router averaged 489.4Mbps/28.4Mbps and 424Mbps/20.1Mbps, respectively.

The T20‘s 8,200mAh battery is more than enough to get you through a day of intensive use. The T20 lasted 10 hours and 6 minutes in our battery drain test, which involved streaming HD movies over Wi-Fi at full brightness. Recharging, on the other hand, is a lengthy process if you use the included 10W adaptor; a 15W power adapter can help speed things up a touch.

Although the T20 ships with Android 11, an update to Android 12L (Google’s OS designed specifically for large-screen devices) is currently in the works. Although we don’t have a definite release date for this update, HMD mentioned it at a tablet briefing.

The T20 is one of only a few tablets to be included in the Android Enterprise program. This means that organizations may pair the T20 with extra device management features like one-touch enrollment and the ability to separate work and personal profiles.

Expect two years of OS upgrades and three years of monthly security patches at the very least. While the OS update policy isn’t as generous as what Samsung promises for its latest tablets (much alone any Apple tablet), it is better than the Lenovo Tab P11 Plus‘s current upgrade path.

A Good Tablet is Held Back by a Subpar Display

The Nokia T20 does a lot of things right. It’s well-made, provides good performance for the money, and has a large battery that will last you all day. Unfortunately, the poor quality of its display overshadows all of these advantages. As a result, the Lenovo Tab P11 Plus remains our top selection for budget Android tablets, with a superior 11-inch display, immersive speakers, and optional keyboard and stylus peripherals for almost the same price. Meanwhile, if you’re not wedded to Android, Apple’s entry-level iPad delivers a superior overall experience for under $100 more.