Adidas is no longer a newcomer to the personal audio market, and its latest offering includes noise cancellation. For $189.99, the Z.N.E. 01 ANC earphones provide active noise cancellation and good audio quality in a waterproof design. However, the ANC is just average, the battery life is disappointing, and the on-ear controls are inconvenient. If you’re searching for a pair of exercise-focused earbuds with ANC, Jabra’s $199.99 Elite 7 Pro in-ears get our Editors’ Choice award for better performance all around. 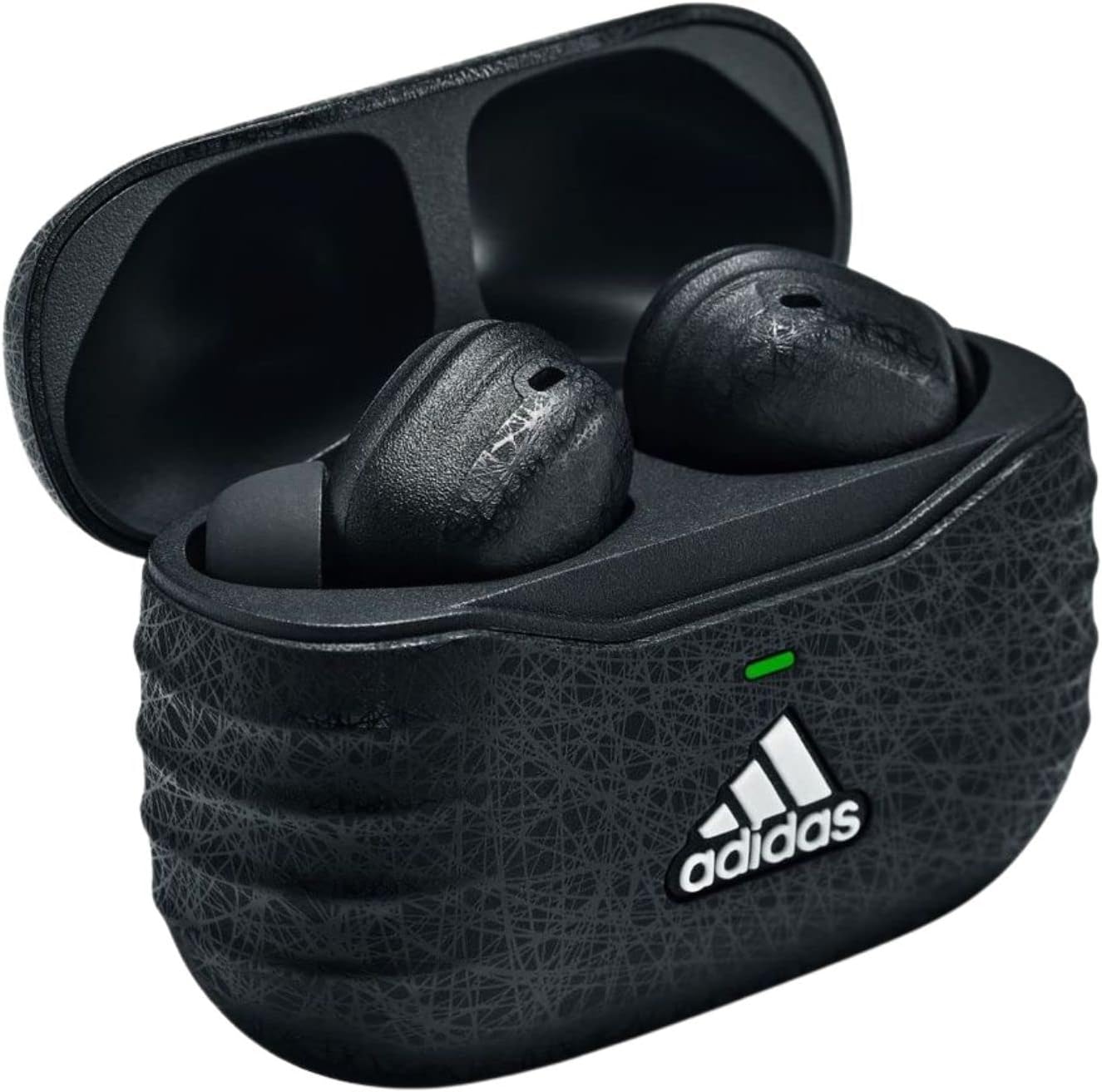 Noise-cancelling earbuds that are good for sports but not great.
Buy this item
The Adidas Z.N.E. 01 ANC earbuds are comfortable to wear and create good sound, but they fall short on a number of fronts when compared to similarly priced noise-cancelling headphones.
PROS
CONS

A Rugged Design and Construction

The stem-style earpieces (and case) come in black or gray and have a complex, randomly crosshatched pattern. The design is attractive, especially on the casing, however you may notice that the pattern makes things appear scuffed up when viewed from a distance. In any event, the earpieces are secure without any further accessories than the three pairs of oval silicone eartips that come with the package (small, medium, and large).

Each earpiece contains a dynamic driver with a frequency range of 20Hz to 20kHz and a 16 ohm impedance. The earphones are Bluetooth 5.2 compatible, and they support AAC and SBC Bluetooth codecs, but not AptX.

Above the stem on both earpieces is a capacitive touch surface. Playback and call management are handled with a single tap on either, but things start to fall apart after that. A double tap and a triple tap are designed to move the track forward or backward, accordingly. In our tests, the track forward gesture only functioned once, and a triple touch switched the sound source from our test iPhone.

The earpieces have an IPX5 grade, indicating that they can survive low-pressure water sprays coming from any direction. They should be able to withstand light rain and sweaty workouts, but don’t clean them by running them under the tap or submerging them in water. In this price bracket, you have two alternatives for totally waterproof earpieces: the aforementioned Jabra Elite 7 Pro and the $179.99 Jabra Elite 7 Active. Both have an IP57 rating, meaning they may be submerged and washed in the sink. Furthermore, the first digit in the rating (5) denotes that they are dust-resistant.

The accompanying charging case has an IPX4 rating, but don’t be fooled: this classification only applies to the outside of the case when the lid is closed, thus putting damp earpieces inside would quickly damage it. The case has a flip-top cover, a front panel status LED, the Adidas logo, and a USB-C connector for charging with the included USB-C-to-USB-A adapter.

On a single charge, Adidas believes that the earphones would last about 4.5 hours with ANC and 6 hours without it. It claims that the case can hold an additional 15.5 hours of charge (with ANC) or 20 hours of charge (without ANC). These estimations will be affected by your use of ANC and volume settings, but the claimed 4.5-hour battery life doesn’t compare favorably with most of the competition, which typically offers 6 hours or more, even with ANC.

Features of the App

The Adidas Headphones app (available for Android and iOS) unlocks a number of features, including on-screen ANC controls, an Awareness Mode that allows you to hear what’s going on around you, and some basic on-ear control modifications. You also get an EQ section, but Adidas messed up the functionality a little by not allowing you to change the five bands of EQ manually and instead forcing you to choose from a number of presets. This is a noticeable absence because most other devices in this price range include this feature.

Other features of the settings menu include the ability to create custom actions, which are simply standard functions that can be assigned to a long-touch on the earpieces’ outer panels. The app is worth installing for the newest firmware upgrades, but given that Adidas is a sports business, we expected to see some form of sporting function.

The noise canceling on the earphones is only average. They reduce the amount of powerful low-frequency rumble heard on planes, which is an area where most ANC models excel. However, a recording of a busy restaurant with clanging plates and raucous discussion proved challenging—the earphones significantly reduced the lows and mids, but the higher frequencies, along with an audible hiss, made it past the ANC (a common masking tactic for pairs that struggle to cancel out highs).

Toggling the ANC modes also activates a loud in-ear prompt, which is yet another technique used by manufacturers to make ANC appear more effective (whatever noise level you hear after switching into the ANC mode is sure to sound quieter by comparison). Thankfully, these sounds can be turned off in the app’s settings menu.

The earbuds offer a tremendous low-frequency thump on tunes with intense sub-bass content, such as The Knife’s “Silent Shout.” They don’t distort at high (unwise) volumes, and the bass remains powerful at lower listening settings.

We get a better feel of the sound signature by listening to Bill Callahan’s “Drover,” which has significantly less deep bass in the mix. The drums on this tune are given a lot of bass, which gives them a big presence in the mix. The baritone vocals of Callahan have a lot of low-mid richness, but they could use a little more high-mid presence. The acoustic strums and percussive hits in the higher registers are bright and crisp.

The kick drum loop on Jay-Z and Kanye West’s “No Church in the Wild” receives enough high-mid presence for its attack to maintain its impact. The vinyl crackle and hiss come through loud and clear, and the sub-bass synth bursts that punctuate the beat aren’t overbearing. This implies that the significant bass boost heard on the other tracks doesn’t extend into the lowest sub-bass frequencies; instead, it’s concentrated in the lows and, to a lesser extent, the low-mids. The voices on this track are crystal clear and free of sibilance.

The opening scene from John Adams’ The Gospel According to the Other Mary, for example, sounds sharp. The lower-register instrumentation stands out a little more than normal thanks to a rich low-mid presence. The higher-register brass, strings, and vocals, on the other hand, take center stage.

The dual-mic array functions admirably and reduces Bluetooth artifacts to a minimum. We had no issue deciphering every phrase from an iPhone Voice Memos recording. The microphone signal is also rather strong.

Adidas Fails to Hit the Target

The Z.N.E. 01 ANC earphones sound good, and we enjoy how water-resistant they are, but their price is too high in comparison to the competition. Noise cancellation is just average, battery life is limited, and controls are unstable, all of which may be avoided with similarly cost alternatives. If you’re searching for a pair of sturdy, noise-cancelling headphones to use while working out, we still recommend the Jabra Elite 7 Pro and the Jabra Elite 7 Active. If you need the greatest true wireless ANC performance, Sony’s $279.99 WF-1000XM4 earphones are still the best in class and well worth the extra money.

Noise-cancelling earbuds that are good for sports but not great.
Buy this item
The Adidas Z.N.E. 01 ANC earbuds are comfortable to wear and create good sound, but they fall short on a number of fronts when compared to similarly priced noise-cancelling headphones.