In the old Harvest Moon/Story of Seasons farming and life sim games. With greater fantasy and hack-and-slash combat, it captures the spirit of those games. Rune Factory 4 Special, like its predecessors, combines farm management, life sim, and action aspects into a soothing, addictive, and repetitive experience. Rune Factory 4 Special is a wonderful PC game to add to your collection. It doesn’t add anything new to earlier releases, but it is a slightly higher-res rerelease of a classic 3DS game. It’s only $29.99, and it’s full of content. 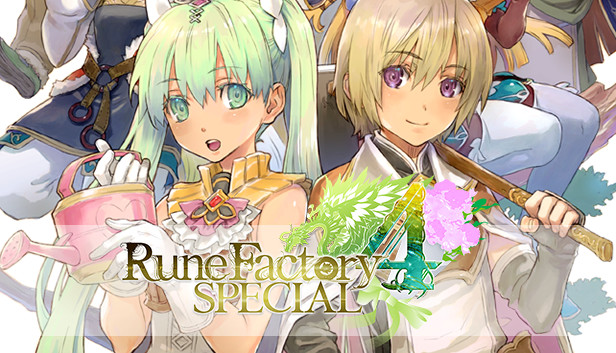 Farm, flirt, and fight
Get from Steam
Fans of the Story of Seasons or Stardew Valley will love Rune Factory 4 Special’s life sim, farming, and RPG action.
PROS
CONS

In the old Harvest Moon/Story of Seasons farming and life sim games. With greater fantasy and hack-and-slash combat, it captures the spirit of those games. Rune Factory 4 Special, like its predecessors, combines farm management, life sim, and action aspects into a soothing, addictive, and repetitive experience. Rune Factory 4 Special is a wonderful PC game to add to your collection. It doesn’t add anything new to earlier releases, but it is a slightly higher-res rerelease of a classic 3DS game. It’s only $29.99, and it’s full of content.

It follows you, an amnesiac envoy, through the charming village of Selphia. You must recollect your memories while defending the village and its dragon (Ventuswill) from internal and external threats. On top of that, you must also tend to the town’s agriculture.

Don’t be fooled by Rune Factory 4 Special‘s adorable looks. It’s a big, content-rich game. You have dungeons to raid, monsters to tame, a huge area to explore, tools and equipment to craft, and deep relationships to foster.

The game’s request system helps you ease into its numerous aspects. Requests are chores or objectives you complete outside your home that serve as in-game tutorials for all Rune Factory operations. Start with fundamental farm and household activities like tilling and planting.

The requests get more complex as the days pass. Another request later provides an axe to clear your farmstead of stumps and wood waste to make place for new crops. Later, you tame animals and assign them to basic agricultural responsibilities. You also start collecting tools, weapons, and recipes. Despite the abundance of content, I never felt rushed. Rune Factory 4 Special allows you to play and progress at your own leisure.

You can choose to ignore the plot and focus on your farm. I spent some days hunting for tame animals, others fishing or cooking recipes I acquired. I’d grind monsters and easy bosses to get Prince Points, which you spend to expand the farm and town.

The hack-and-slash gameplay is simple, but there are plenty of weapons and magic attacks to learn. This game’s action system is reminiscent of Legend of Mana’s.

It doesn’t take long to get used to Rune Factory’s fundamental mechanics and start messing around in whatever way you choose. A basic game at its core, Rune Factory 4 Special may be extremely deep when given enough time.

Whatever you do, the game is peaceful. Still, all Story of Seasons games contain a significant bit of repetition. So you do certain jobs frequently, especially early on when you don’t have any animal companions to help you out.

To enjoy Rune Factory 4 Special, you must be tolerant to repetition. If you can get over that, there’s a big game with limitless farming, crafting, cooking, and dating components.

Relationships are vital in Rune Factory 4 Special. As a light-hearted fantasy life sim, the game invites you to form bonds with the townspeople and other like-aged bachelors. Talking, trading, gifting, and flirting with Selphians is as important as farming, crafting, and combat. In fact, Rune Factory 4 Special emphasizes relationship-building with the added Newlywed Mode—a new tale episode for your in-game spouse.

You can unlock a lot of bonus stories because you have 12 potential spouses to pick from (six male and six female). After the main tale, Each Character gets their own fully narrated epilogue. If you like the characters, you should play or watch these pleasant events.

The text is bright and amusing, with some serious moments. The townspeople’s assistance throughout Rune Factory 4’s three major story arcs adds to the game’s appeal.

Like Fire Emblem Awakening for 3DS, the game is partially voiced. Most text scrolls are punctuated with a few phrases or exclamations. Considering the game’s 3DS origins, the voice performance is very good overall. My only complaint is that there is no ability to swiftly forward text. I’d also like to get rid of the obnoxious booming sound that plays when a character speaks strongly. Thankfully, this effect isn’t used often.

Can You Rune Factory 4?

Since Vsync is set by default, you should always get a smooth 60FPS. Disabling Vsync forces the game to run in turbo mode, which in my case was a ridiculously rapid refresh rate. In the options, you can change the screen modes and adjust the resolution, graphics, and keyboard layout. The game lacks the ability to quit at any moment or return to the main menu. You can only access the main menu from your save diary, which you must physically travel to. Rune Factory 4 Special is easy to play whether you have a gamepad or not.

Rune Factory 4 Special is a cutesy sim with old-school charm. It has great gameplay, depth, character interaction, and a ton of stuff. To be fair, it is an upscaled 3DS port that lacks the WOW effect of many recent RPGs. But if you’re at all interested in the game or the Story of Seasons franchise, Rune Factory 4 Special should be appealing.