Because The King of Fighters ’98 is widely recognized as one of the best fighting games ever developed, it’s no wonder that developer SNK has revisited the title numerous times since its initial release. SNK commemorated the tenth anniversary of the game by porting it to the PlayStation 2 as The King of Fighters ’98: Ultimate Match, which included more characters, stages, and gameplay modes. The King of Fighters ’98 Ultimate Match Final Edition (also known as KOF ’98 UM FE) is now available for purchase as an updated Ultimate Match. The enormous roster has been rebalanced, and new characters, stages, move sets, rollback netcode, and online lobbies have been added to this edition of the iconic fighting game. The Final Edition’s gameplay preserves (and improves upon!) its predecessor’s amazingly rich and flexible fighting mechanics, but it lacks a few aspects from the famous PS2 version. KOF ’98 UMFE, on the other hand, is a near-flawless PC game that ranks among the greatest in the fighting game genre. 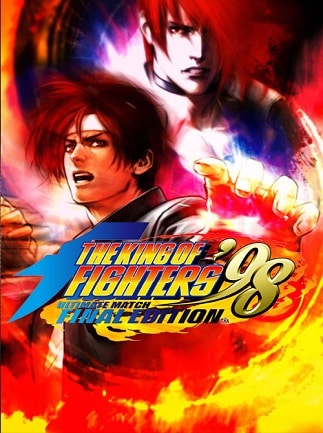 9.7
The King of Fighters ’98 Ultimate Match Final Edition (for PC)
Check on Humble BundleCheck on SteamCheck on Amazon

SNK, with the help of Code Mystics, brings a traditional fighting game up to date with modern features including great netcode, lobbies, and a spectator option. This Mount Rushmore fighter achieves its pinnacle, bringing lag-free online play and exciting, adaptable, and hard-hitting gameplay.

Before SNK’s bankruptcy and rebirth, the original KOF ’98 marked the pinnacle of the company’s fighting game production prowess, and Final Edition retains that enchantment. Final Edition includes the series’ familiar 3-on-3, non-tag fighting, luscious scenery, and amazing music, but it loses the 3D backgrounds and well composed soundtrack seen in the PS2 edition. I don’t mind the game’s 2D sprites clashing with the game’s missing polygonal surroundings, but the rearranged score was pure audio ecstasy.

If you want to utilize a grappler like Clark to stay close to an opponent, you can use Ultimate Mode to select Advance’s dash (for fast moving in and out of melee range), Extra’s dodge (for dodging blows while keeping within grapple range), and Extra’s power gauge (which lets you manually charge the super meter). In short, Ultimate Mode’s adaptability allows you to customize the fight style to your preferred characters, which is quite handy. This is on top of the “basic” fight techniques, which include super moves, desperation movements, blowback attacks, guard crushes, hops, super jumps, and counters. If you’re coming from a game like Street Fighter, the game’s mobility and offensive/defensive options will impress you.

In KOF ’98 UM FE, SNK altered various characters’ move sets, and the results are remarkable. Andy’s powerful fireball has evolved into a big globe of energy, similar to his KOF ’99 version, making it a powerful anti-air weapon. Geese now possesses his extra-lethal Fatal Fury: Real Bout Raging Storm, which is distinct from his last KOF appearance in KOF ’96. After all these years, Athena is still a huge aggravation, since she opposes everything (and has the single shrillest voice in video game history).

When against the CPU, combos flow naturally in the hard-hitting SNK style, but online fighting is where the game shines. KOF ’98 UM FE now dazzles like never before, thanks to Code Mystics’ implementation of rollback netcode in December 2021. Online battles now seem as smooth as local battles, which the game’s devoted community has been requesting for years. There’s no need to rely on roms or third-party services any longer. The outstanding rollback netcode in KOF ’98 UM FE is on par with the netcode updated by Code Mystics to The King of Fighters 2002 Unlimited Match, and far superior to the poor netcode in The King of Fighters XIII: Steam Edition.

KOF ’98 UM FE outperforms KOF ’02 UM in terms of online features, having 9-person lobbies in both ranked and unranked modes. Lobbies allow you to build rooms to queue up adversaries who want to put your fighting game skills to the test, as well as watch other battles. These enhancements make it easier for the community to locate matches and keep the KOF ’98 UM FE competition alive and well on PC.

Aside from online fighting, KOF ’98 UM FE includes a variety of game modes. Endless (in which you fight CPU-controlled characters in a series of battles), Challenge (in which you attempt to complete 30 fight-related tasks), and Practice Mode are also included (you set training parameters for game mastery).

Is KOF ’98 UMFE compatible with your PC?

Because The King of Fighters ’98 is a sprite-based game that spans decades, you won’t need a high-end gaming desktop or laptop to enjoy the martial arts action. Your computer must have at least a 1.8GHz dual-core Intel Pentium 4 CPU, an integrated GPU (with 256MB of video memory), 1GB of system RAM, and 1GB of accessible storage, according to the game’s Steam website.

KOF ’98 UM FE ran smoothly at 60 frames per second on my gaming PC, which has an Intel Core i5 processor, 16GB of RAM, and an Nvidia GeForce GTX 1080 Ti graphics card.

KOF ’98 UM FE doesn’t have a lot of graphics settings, but it does enable you play about with the visuals a little to create a look that you like. Final Edition, like The Last Blade, Metal Slug 3, and a slew of other Neo Geo Steam conversions, lets you overlay scan lines to recreate the look of an old-school monitor. The result is especially satisfying because it transports you back to the days of putting quarters into Neo Geo uprights. In addition, you can use borders (simple or with art) to keep the 4:3 aspect ratio. The graphics options in Final Edition range from 640 by 480 to 2715 by 1527 pixels in resolution. A video-filtering option lowers the rough edges of the pixels, but the images become less crisp. Unfortunately, the character color-editing functionality from the PlayStation 2 version is not here.

The King of Fighters ’98 Ultimate Match Final Edition has gone from a well rated fighting game to one that should be in every genre fan’s catalog thanks to SNK and Code Mystics listening to and incorporating community suggestions. The game’s large roster and superb combat mechanics, as well as the recently introduced online netcode and lobbies, giving it the finishing touches it needs to compete with today’s fighting game offerings. KOF ’98 UM FE is the pinnacle of fighting games, and despite being decades old, it has numerous combat elements that modern competitors would do well to emulate.

Why Stadia Is Better Than Other Cloud Gaming Platforms, in 5 Points