External solid-state drives (SSDs) at a discount may be purchased in every corner of the internet these days, thanks to the low cost of flash-based memory technology. As a result, manufacturers are coming up with innovative ways to distinguish their drives beyond price, such as incorporating new interface technologies and unique aesthetics that appeals to specific populations, particularly gamers. The WD Black P50 Game Drive SSD ($191.99 for 1TB) from Western Digital utilizes this approach. The P50 has a shock-resistant enclosure and blazing-fast transfer speeds thanks to bleeding-edge USB 3.2 Gen 2×2 connectivity, in addition to looking like a loot container your avatar may snarf up and add to an inventory box.

The P50’s quoted prices may initially give you pause, given that high-quality external SSDs can now be purchased for less than 15 cents per gigabyte. There’s also a 500GB variant for $114.99 and a 2TB model for $349, in addition to our 1TB test unit. The P50, on the other hand, isn’t aiming to compete on price, so the actual test of its worth is if you enjoy the durability and aesthetics, as well as whether you can take use of the USB 3.2 Gen 2×2 interface’s maximum speeds.

The first criterion is subjective, but I believe WD executes the notion admirably. The P50’s design is inspired by a shipping container, which is very popular right now. They’re not simply popular as cover in post-apocalyptic FPS games, but some even want to live in them in real life! The drive is shaped like a compact black rectangle with ribbed edges and noticeable hex screws in each corner. With a stylised font and a layout that suggests a utilitarian label of contents, the branding is congruent with the shipping-container motif.

For an SSD, the drive is large, measuring 0.55 by 4.7 by 2.4 inches (HWD). In comparison, the Samsung Portable SSD T7 Touch measures 0.3 by 3.3 by 2.2 inches. The extra weight, on the other hand, may help the drive survive minor dips and bumps. Although WD does not claim that the P50 satisfies MIL-SPEC durability standards, it does describe the enclosure as “tough and shock-resistant.” Sure, game files aren’t as precious as family photos or home movies, but everybody who carries a portable drive about risks dropping it, so I think spending a little more for a little more durability is justified.

The best thing about the P50’s physical design is that it appears to be purposeful, much as how LaCie’s tough drives have embraced the industrial-chic aesthetic. This stands in contrast to several other ruggedized drives, some of which having MIL-SPEC certifications but lack any aesthetic characteristics.

If you like the look of the P50, WD also makes the P10 external hard drive and the D50 dock, which combines an SSD and a Thunderbolt port for attaching other peripherals.

A USB Type-C to Type-C cable, a USB Type-C to Type-A cable, and the Quick Install Guide are included in the P50’s box. It’s great that WD offers both types of connections, as this eliminates the need for adapters when connecting to PCs or game consoles. The P50 is compatible with both the Sony PlayStation 4 and the Microsoft Xbox One, in addition to PCs and Macs.

Although sophisticated users can download additional tools like the WD Drive Utilities software and the WD Security program to set passwords, check the drive’s health, and conduct other maintenance activities, setup with a PC is plug-and-play straightforward.

The P50 comes with a five-year warranty from WD, which is the longest we’ve seen for an external drive. It covers the drive itself, much as other warranties, however it doesn’t cover data recovery if your drive fails.

Internally, the P50 uses the PCI Express interface and supports NVMe, making it similar to WD’s internal SSDs intended at games and power users, such as the WD Black SN750. The P50 is rated for maximum read speeds of 2,000MBps, but you’ll need a spare USB 3.2 Gen 2×2 port with a USB-C style adapter on the PC you’re attaching it to. These ports, which are sometimes referred to as “20GBps USB” ports, are rare and far between. The slower USB 3.2 Gen 2 standard, which has a maximum bandwidth of 10GBps, is currently supported by many new PCs and laptops. The USB-C oval-shaped port is shared by both of these interfaces. Almost all PCs include USB ports that support the slower USB 3.2 Gen 1 (previously known as USB 3.0) standard, which has a top speed of 5Gbps.

There are still a few hitches to sort out with the USB 3.2 Gen 2×2 interface because it is so new and so rarely used on PCs. When transferring data through this interface, the first drive we tried, the Seagate FireCuda Gaming SSD, proved unreliable, and we frequently had to switch to the slower 10GBps speed (via a software toggle). During our testing with the P50, however, we had no such concerns. We used the 2×2 port on our storage testbed, which was recently outfitted with an Orico PCI Express card that provides USB 3.2 Gen 2×2 compatibility.

I compared the P50’s performance against that of a few other similar drives, including the 1TB versions of the OWC Envoy Pro EX, the Crucial X8, the SanDisk Extreme Pro, the Samsung Portable SSD T7 Touch, the ADATA SE800, and the aforementioned Seagate FireCuda Gaming SSD, in our benchmark testing. All of these drives, with the exception of the Seagate, do not support Gen 2×2 speeds. (A Gen 2×2 version of the SanDisk Extreme Pro is now available, but we haven’t yet reviewed it.)

The P50 is in exclusive company, as seen by the results of the Crystal DiskMark sequential read and write tests. Only the Gen 2×2-capable FireCuda comes close to 2,000MBps, and the results aren’t far off from the advertised limit. The other drives show sequential read and write rates of around 1,000MBps, indicating PCI Express internals on USB 3.2 Gen 2. The P50 slows down to this speed when connected to a Mac or other system that doesn’t have a Gen 2×2 connection, as you can see from the Blackmagic Disk Speed Test results.

Sequential data access rates are important for comparing manufacturers’ ratings and judging theoretical performance, and they’re also what you can expect while transferring games or other large files between your PC’s drive and the P50.

On our in-house folder transfer test, the WD Black performed admirably. A 1.2GB folder containing a variety of file kinds took 2 seconds to transfer from one spot on the device to another. Surprisingly, its score of 1,311 on the PCMark 10 storage test was far lower than the FireCuda’s, but this is to be expected from external SSDs. PCMark 10 is a trace-based test that simulates real-world applications such as online browsing and document editing.

If You Can Do 2×2, Incomparable Exterior-SSD Pace

The WD Black P50’s value proposition for PC users is entirely dependent on whether your gaming rig has a USB 3.2 Gen 2×2 port. With a beautiful, durable casing designed to appeal to gamers, the P50 might be worth paying a little more for than a 1TB external SSD if you can take advantage of the faster speeds. If your PC supports Gen 2×2 (which, regrettably, it probably doesn’t), you’ve got a wonderful receptacle that can hold numerous games and free up space on your computer’s or game console’s internal drive. Otherwise, you’re paying for a cool-looking vehicle that’s “just” quick.

Aside from those concerns, if you’re looking for a really durable external drive that isn’t specifically designed for gaming, we recommend the LaCie Rugged drives, which offer more robust protection while still maintaining an attractive design. 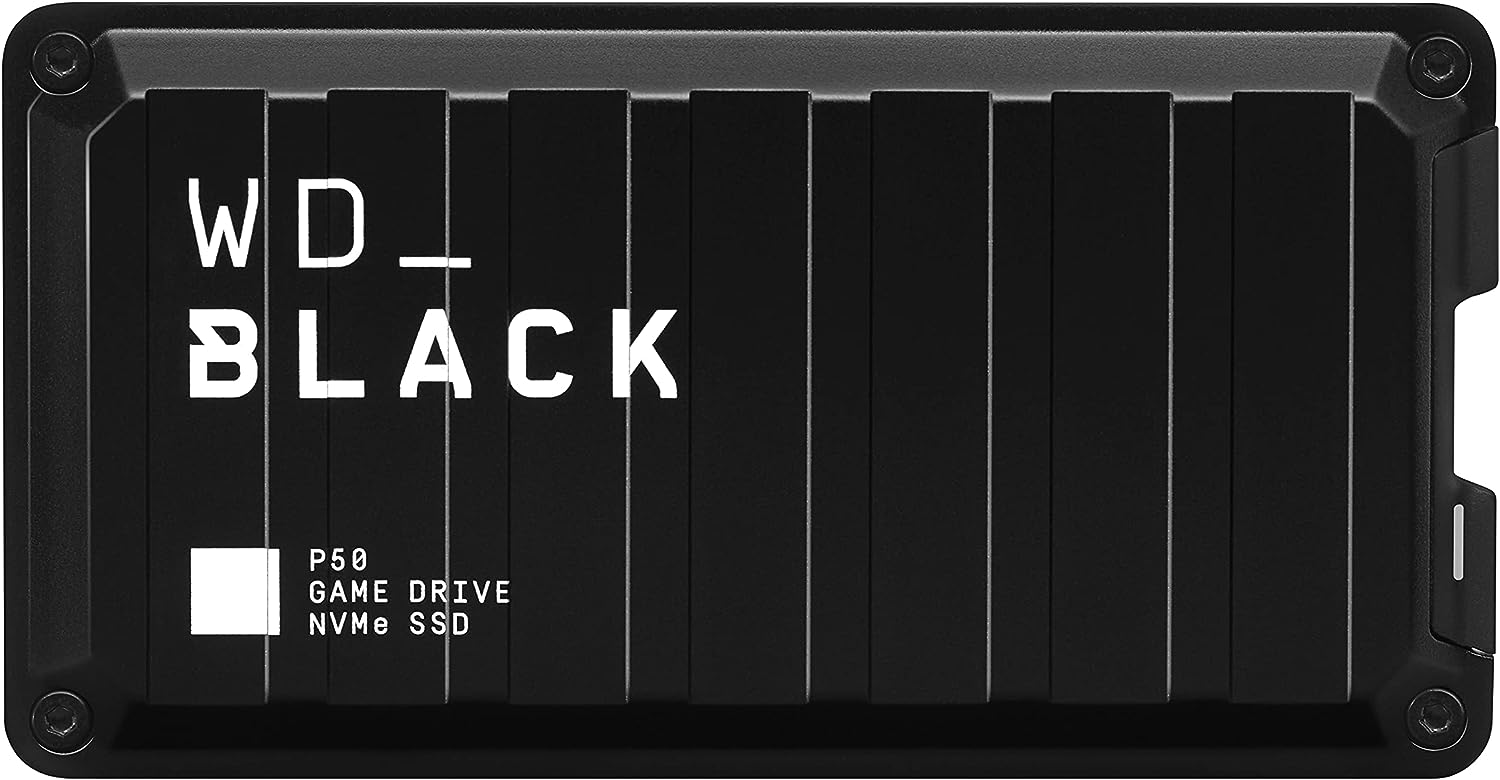 AT THE END OF THE DAY

The WD Black P50 Game Drive SSD is a visually attractive, no-compromises storage solution for large game files, albeit you’ll need a PC with USB 3.2 Gen 2×2 connectivity to take use of its full potential.